On April 8, 2021. Posted in UncategorizedAdam McFarlane 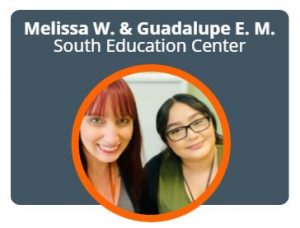 This story is about belief in others, and high expectations demonstrated through the relationship between school counselor Melissa Winship and former SECA student Guadalupe Estrada Martinez.

Guadalupe (pictured on the right) was active in AVID and the SECA student council as a high school student. She was driven, intelligent, and worked hard, though she had no hope that college was an option for her as an undocumented teen. But, Melissa (pictured on the left) saw something special in Guadalupe.

As an undocumented student, Guadalupe thought her dreams were just dreams. She had to stop dreaming and face reality. The future life she envisioned for herself and her family would not happen. Guadalupe didn’t have that card with nine numbers (a social security number).

Guadalupe learned that under (DACA), she could apply for state financial aid to go to college. Melissa went out of her way to get information and resources for Guadalupe. Melissa did not only look for free lawyers to help Guadalupe file for DACA, but for the last two years of her high school experience, Melissa went above and beyond to find ways to make college possible.

Melissa held FAFSA nights at South Education Center Academy, where parents and students got help filling out their financial aid paperwork. Knowing Guadalupe’s situation, Melissa expanded it to Financial Aid Night to broaden opportunities and support Guadalupe in applying for aid. Guadalupe applied to colleges, applied for scholarships, and continued to work hard and graduate on time with her senior class.

By the time Guadalupe graduated from SECA, she was awarded $300 through the MN Dream Act grant and received the Justice Alan Page Scholarship. But, funds for college were still out of reach. Instead of giving up when Guadalupe found out how little money she could receive for college, she worked even harder to come up with the money. She now believed that college was, in fact, in her future, and she wasn’t going to let anything stop her.

Now that they were officially colleagues, Guadalupe continued to go to Melissa for financial aid questions and other college-related questions, including helping Guadalupe prepare to transfer to Mankato State University for her bachelor’s.

When Guadalupe transferred to Mankato state to finish her last two years, she realized that she would need student loans to pay the tuition. Unfortunately, she was unable to get a private loan without a co-signer. Melissa knew that Guadalupe’s journey could not end there, and although her father wanted to support Guadalupe, he could not.

Unbeknownst to anyone in Intermediate District 287, school counselor Melissa Winship co-signed Guadalupe’s student loans. Melissa believed in her and trusted her, not only as a former student but now as a colleague.

Guadalupe shared that Melissa always made her feel included and never a bother. She was always more than happy to help. Guadalupe shared, “I can honestly say that I owe where I am to Melissa and other teachers at SEC that always guided me and pushed me to not give up on my dreams.” If it weren’t for Melissa, I would not have gone anywhere…”

This evening I am incredibly pleased to announce that as of March 15, 2021, Guadalupe Estrada Martinez is a licensed special education teacher at SEC.